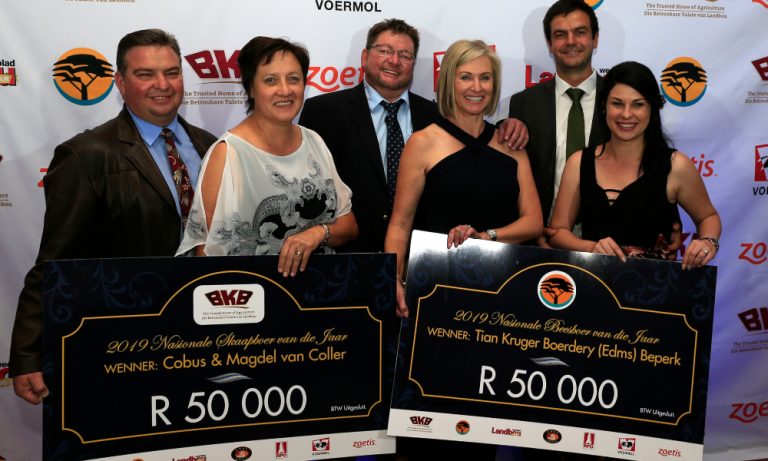 All problems can be solved as long as you have access to good feed. This was according to Cobus and Magdel van Coller, the husband-and-wife team who won the Sheep Farmer of the Year award at the recent Best of the Best Sheep and Cattle Farmer of the Year Awards in Bloemfontein.

The Van Collers farm near Viljoenskroon in the Free State, where they run a mixed operation that includes an integrated livestock and crop production system.

Van Coller, who was featured in Farmer’s Weekly earlier this year, has been implementing conservation agriculture practices for a number of years, including planting cover crops on which he grazes his sheep and cattle.

He said it was a privilege to take home the title, particularly as he was nominated by the late Hendrik van Pletzen, former technical manager at main sponsor Voermol, who had always been one of the driving forces behind the competition.

“I knew it was an important title but I had never realised how high the standards are,” he said.

The Van Collers have been farming since 1998, and have adapted their approach to ensure the future sustainability of their farming operation.

They have invested in precision equipment to facilitate record-keeping and the measuring of inputs, such as installing a RFID system for their SA Mutton Merino component.

“It is expensive, but it pays to know what is going on,” he said.

The title of Cattle Farmer of the Year was awarded to Tian Kruger who farms in the Marble Hall district in Limpopo.

He also runs a mixed farming operation, which includes crops such as tobacco, cotton and maize, as well as citrus orchards, and has Bonsmara cattle component.

While the cattle are run as a commercial herd, he manages them as stud animals, using only stud bulls he buys in.

“One of our golden rules is that we never use our own bulls,” he said.

Moolman said they viewed production as the core of the business.

“We are breeding meat,” he said.

Kruger introduced his cattle component in about 1999, and said it gave him peace of mind.

“If I have to sell my herd it will cover the debt I have on my permanent crops [citrus orchards],” he said.